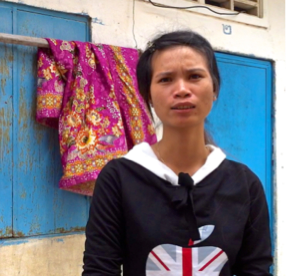 “I don’t like my factory job but I have little education. My family is poor and in debt so I have no choice. I must support them,” says Cambodian garment worker San Samnang, a thin 26-year old who left her rural village eight years ago to seek employment in the factories on the outskirts of Phnom Penh.

In addition to her garment factory job, San Samnang has become an activist with the Workers’ Information Centre (WIC), a women’s association that promotes empowerment and human rights in Cambodia.

Ninety percent of garment workers are females under 30. They earn just $80 a month minimum wage [as of March 2014], and have been protesting for a basic living wage of $160 monthly.

The poorly-educated women are away from family support structures in their rural villages and the factory is their first job. They are vulnerable to exploitation by factory owners in Cambodia’s $5 billion a year textile industry. Poor public services mean workers live in crowded rental rooms with poor sanitation, smelly shared toilets, no clean water, and no street lighting or police protection in factory neighborhoods. Many get robbed on paydays and live in fear of rape, especially at night when they leave work and have to walk home in the dark.

Unable to afford enough food each day, garment workers in Cambodia are undernourished, stressed both mentally and physically, and suffer from a variety of ailments. Interviewed in Phnom Penh, Dorte Soerensen of Clean Clothes Campaign- Denmark noted that garment workers’ wages are too low to allow women to buy nutritious food. “Workers cannot afford enough food calories and nourishment. They go to work hungry. Their immune systems are weak.

“When the malnourished women are exposed to heat, textile dust, chemical fumes or bad ventilation in the factories, they feel nauseated and faint.” Unfortunately the problems do not stop there.

In Cambodia, garment workers cannot survive on their salaries yet when they protest for a living wage, they face lethal violence from the government and military police. Country-wide garment factory strikes in early 2014 resulted in five workers being shot by military police, taserings, severe beatings and many more being arrested and unaccounted for. The government has banned gatherings over 10 people and condoned factory owners firing union activists, drawing condemnation from the International Labour Organization and civil society groups.

Malnourished and stressed, underpaid workers who are unable to afford food, rent or medical care — yet are still trying to send money to their rural families — become overwhelmed and feel powerless.

Nevertheless, the desperate women find ways to stand up for themselves. Despite violent police crackdowns, garment workers continue to demand a living wage of $160 a month with support from organizations such as WIC.

San Samnang joined other young women on their one day off that week at a Health Information Sharing Day for garment workers, arranged by the Workers Information Centre (WIC) Cambodia in collaboration with Paula Stromberg.

In response, Dr Whittington commented on each plant remedy, questioned the efficacy of some local remedies such as mango bark that workers believed might cure a prolapsed uterus. (Young women in poor physical condition have babies in quick succession; the uterus remains so stretched it prolapses and hangs right out of the body with some women). Dr Whittington then gave a talk on nutrition and symptoms of vitamin deficiencies, as well as answered questions.

Practical remedies caught the young women’s attention, such as the suggestion to start taking ibuprofen a day ahead of the start of their periods and attendant menstrual pain. Garment workers who sit long hours on hard factory benches were particularly interested in a sample ‘donut’ cushion they could use at work to help alleviate hemorrhoids. As a small business idea, garment workers were reminded that they could produce and sell their own versions of the medical-supply hemorrhoid cushion.

“Garment workers told us they enjoyed sharing the many uses of low-cost sodium bicarbonate (baking soda) with their neighbours— everything from use as a tooth cleaner, fire extinguisher, deodorizer, antacid, and anti-inflammatory applications for mosquito bites, skin rashes,” noted Sok Thareth.

Dr Whittington added, “I was interested in the women’s use of the Neem tree, or Sdao as it is called in Cambodia, as a viable alternative for treating simple medical concerns such as yeast infections and tooth cleaning. I also learned that the leaves are tasty in salad or fried and sprinkled over rice.

“It may be useful to keep an open mind and collaborate with people who have difficulty affording first world medicines as they find ways to treat simple conditions.”

WIC held the Health Information Sharing Day to help women learn to advocate for themselves. WIC aims to strengthen women’s knowledge and leadership skills so they can advance their interests in the workplace and wider society. Standing up for one’s rights, however, is a daunting task these days in Cambodia.

Cambodia’s $5 billion a year apparel industry accounts for about 95 percent of the entire country’s exports and employs about 700,000 workers in 800 factories.

Over 90 percent of Cambodia’s garment factories are owned by foreigners based in Hong Kong, Taiwan, China, Singapore, South Korea and Malaysia. Due to complex factors including entrenched patriarchal views about females, and systemic government corruption, trade unions in Cambodia have not been effective in representing women’s concerns, or negotiating much improvement to wages and working conditions — although 90 percent of garment workers are women, nearly all top union leaders are men.

A living wage is at least $160 USD a month in Cambodia. In April 2014, the minimum wage was $81 dollars a month for garment workers. Poverty wages enslave them.

Han Manin, garment worker in Phnom Penh attended the Workers Health Information Sharing Day. “We learned how to use low cost baking soda in water to soothe hermorrhoids, a common problem for garment workers who sit 12 hours a day on hard factory benches. I’ve already tried baking soda to clean my vegetables, as a deodorant, and to take the itch from mosquito bites. It works.”

Of all the deeded land in the world, women own just 1%. Women earn only 10% of the world’s income yet women work 2/3 of the world’s working hours. – statistics from the United National Millennium Campaign

She kept her house and business after legal intervention 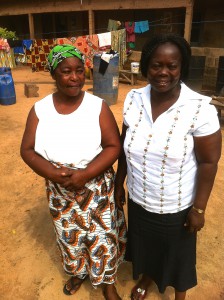 As a young woman, Mercy O__ left her homeland to work in Nigeria for a few years before returning to her village with an impressive nest egg dowry of 500 cedis, a fortune in 1983. She found a husband and turned all her money over to him. In those days, it was normal practice.

Mercy recalls, “We opened several cornmeal grinding businesses with the money, but soon afterwards, my new husband started to beat me. He claimed our first child was not his and refused to pay school fees. As the man in the house, he controlled the business profits. We opened more businesses with my money and by then I had three children. He continued to beat me.

“One day, while cooking supper on the porch, he grabbed the kitchen utensils and told me to get out. I was left with nothing.”

Nipah investigated the case. Reaching a settlement was difficult because the husband claimed the businesses and the cement block house built with Mercy’s money were all his. Nipah also was threatened with a lawsuit from the husband because she closed his cornmeal shop due to child labour infractions. “The father had pulled his 12-year old son Thomas out of school and made him work in the shop. I said child labour was illegal and padlocked the shop,” said Nipah.

After an all-day session with the parties involved, Nipah had the difficult task of making a ruling. She divided the family assets in half.

Luckily there was solid evidence. Mercy had invested some of her dowry in a cement-block house so she was allowed to keep the family home. “As well as keeping the house, I was awarded two cornmeal grinding businesses close by, and my husband got two mills and a house in a town about four miles away.”

Son Thomas went back to school. Today, Mercy has grown her holdings and now has other kiosks. “I am grateful for the legal help. Because of Veronica Nipah’s legal knowledge, I have my house and businesses.” 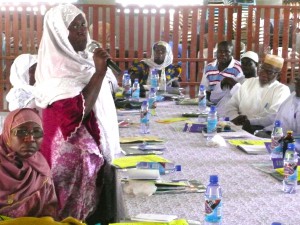 Muslim women community leaders and imams from across Ghana attended an Islamic Forum on Domestic Violence at the Ghana Muslim Mission in Accra to learn about the country’s Domestic Violence Act that changes how family problems are resolved within their community.

When women are financially stable and educated, they delay first pregnancies and have healthier children, according to the United Nations Population Fund, and are far more likely to send their children to school. When women do not have discretionary income for their own or their children’s education, where girls’ education is considered frivolous, and where girls are relied on to contribute labor to the household, they cannot improve their lives. Their communities are also shortchanged.

Legal literacy volunteers provide women in their communities with critical assistance in accessing the justice system and addressing issues like violence and property rights.

Ghanaian women celebrated three victories in the 2010 District Assembly election in the Upper West Region of Ghana, with the help of bicycles provided by YWCA Canada and Canadian Crossroads International through local Ghana partner ABANTU for Development. More than 40 women ran in the Upper West Region including three in Wa Municipality, while the last election in 2006 saw just one female candidate. The ten female candidates were given bicycles to help them campaign in remote towns around the regional capital of Wa, in Ghana. Bicycles enabled them to distribute campaign flyers in rural areas and discuss problems with local people in a bid for votes in the District Assembly elections.

“I’m dialling the telephone number of a stranger, about to ask for an interview about her criminal activity that could get her blackmailed, raped or killed.” by Paula Stromberg 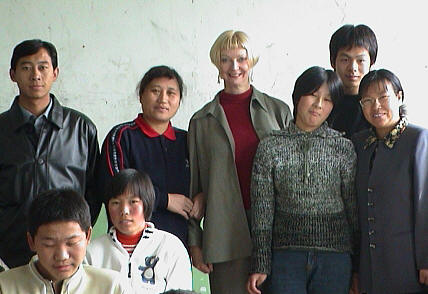